A Two-Year Evaluation Project in East Lothian and Midlothian, Scotland

A STUDY BY SPEECH AND LANGUAGE THERAPISTS IN SCOTLAND

Between 1997 and 1999, 25 children in East Lothian and Midlothian took part in the Johansen IAS project, the results of which were independently audited. The group comprised 10 girls and 15 boys and the mean age was 8 (range 5 – 12). Children were selected according to the following criteria:

The aim of the project was to carry out an evaluation of the progress of children on Johansen IAS in order to assess its value as part of the speech and language therapy on offer to this client group.

Speech and language therapy assessments were carried out before and after Johansen IAS to measure written and spoken language skills and audiometry was attempted to record hearing profiles and auditory dominance.

Pre- and post-therapy information relating to attention, behaviour, co-ordination and language was collected from the children’s parents and teachers, using a formal questionnaire. Parents were also asked to keep a diary of their child’s progress, and a final report was obtained from both parents and teachers.

The Johansen IAS programme lasted for a complete academic year and all the children except one completed the full course of therapy. The treatment required continuous participation from both children and parents so the fact that only one child dropped out was a positive indication of the perceived value of the therapy.

As the Johansen IAS assessments did not provide enough firm data from which to draw conclusions about the effect of Johansen IAS on language (due to sample size and composition), the observations of both parents and teachers were analysed by counting the number of times an area of improvement was noted. Eleven categories were identified and the results for the first year of the project (11 children) are shown in the following graph. The results from the second year of the project echoed those of the first year. 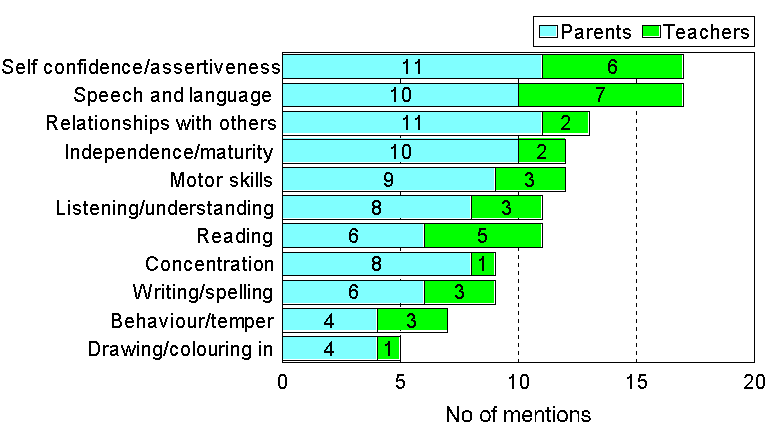 Pre- and post-therapy information was collected on various aspects of communication, and improvements were recorded in almost all areas. The greatest improvements occurred in pronouncing sounds and words; learning new words and using the correct one; constructing sentences accurately; and self-confidence, both when speaking and in general.

It is important to bear in mind that the children were assessed over a year and would be expected to mature and develop during that period. The children came from a fairly wide age range and the recorded comments indicate that their increase in maturity was greater than might have been predicted. The same is true for the improvements in motor skills which were noted in a majority of the children.

Comments on the children’s relationships with others included references to more imaginative or pretend play, and an improved awareness of rules and ability to await their turn in games or group situations. Several parents noted an increase in what they called ‘normal’ behaviour and commented that their child seemed generally less angry and frustrated. Some parents recorded an increase in ‘cheekiness’ as a positive change since it was seen as a sign that the child had acquired the confidence to assert her/himself.

Discussion of the East Lothian and Midlothian study

It is difficult to separate the effects of one form of communication therapy from other treatments, or to measure the changes in a child’s development against the normal maturation process.

Our conclusions are drawn from the observations of the children’s parents and teachers, based on their knowledge of the children’s previous development and anticipated progress. Although it cannot be proved that Johansen IAS was a contributory factor in the improvements shown by all the children in our pilot study, there is sufficient observational evidence to support our view that Johansen IAS is a valuable therapy tool for use when working with children with speech and language difficulties.